The remains were found while land was being cleared for the construction of the Maritsa motorway, en route to Turkey, near the village of Kroum, municipality of Dimitrovgrad. Experts say that the skeleton, was from the Neolithic age, dates back to 6000 BCE, and belonged to a young boy, aged 10-15.
Anthropologist Tsvetan Minkov and experts from the Dimitrovgrad museum were also called to the site. The skeleton is most likely going to end up in the museum, but its safe extraction from the grave will present a significant task. Although the teeth are reportedly in "superb condition" the rest of the skeleton is in extremely brittle state and it "almost dissolves upon touch".

According to the report, the boy was found buried in the foetal position. 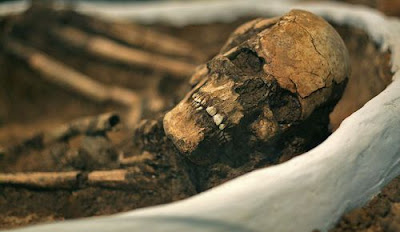