Bart de Zwart has spent five days alone at sea travelling the 300 miles from Hawaii's Big Island to Kauai on a paddle-board. For some reason.
The 41-year-old Maui says he's the first person to make the solo crossing on a standup paddleboard and that it was the hardest thing he's ever done.
He'd strapped enough freeze-dried meals to last seven days to his 4.2-metre longboard and spent then most of his days paddling.When it came to resting for the evening he slept on inflatable water mattress which he had to blow up and then strap to the board.However, it didn't always go to plan and on several occasions he was startled awake as his board flipped over and left him in the water… we can't imagine why he was the first person to do this.
de Zwart, originally from Holland, says he thinks the journey took more than 215,000 strokes with his two-metre paddle. See him in action (last year) below. 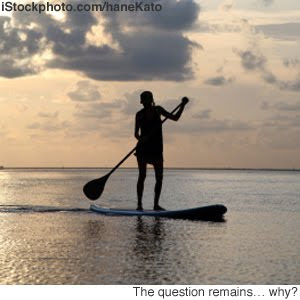