ドリフト走行の神業をご覧あれ！ Who’s The Best Drifter in The World?

In 2005, Ken Block began his national rallying career with the Vermont SportsCar team. Vermont SportsCar prepared a 2005 Subaru WRX STi for Block to compete with. His first event of the rallying season was Sno*Drift, where he ended up finishing seventh overall and fifth in the Group N class. During the 2005 season, Block had five top five finishes and placed third overall in the Group N class and fourth overall in the Rally America National Championship. At the end of his first rallying year, Ken Block had won the Rally America Rookie of the Year award. 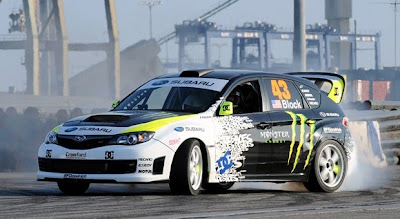 On January 6th, 2010 the Monster World Rally Team announced Ken as their driver for selected rounds of the World Rally Championship, in which he will be campaigning the Monster/Ford Racing Focus RS. His car will be prepared and run by the North of England based M-Sport, who also prepare the official Ford WRC cars. He will be simultaneously running in his sixth season of the Rally America Championship in an open class Ford Fiesta, as well as his fifth X-games. Ken will also be the first ever American driver to campaign for the World Rally Championship. On February 27th, Block won the Rally in the 100 Acre Wood for the 5th consecutive time. This broke the record held by John Buffum. Ken is currently being trained by Ford factory driver Markko Martin.